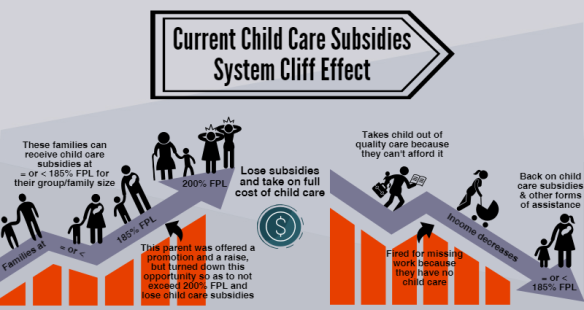 The WI Governor recently announced that a component of his “Wisconsin Works for Everyone” proposal, which is a part of his 2017-19 budget, integrates a focus on “strengthening families.” This includes two measures in particular, which could give early childhood a positive boost: (Below taken from the Governor’s initial press releases and Wisconsin Works for Everyone announcement).

Let’s break down what these measures mean for early childhood and for families, and what they look like in action.

The first measure, an effort to eliminate the “child care cliff” addresses the issue that some families have participating in WI Shares, which provides child care subsidies to help lower-income families pay for quality child care. The “child care cliff” refers to the effect that occurs when a family goes from being initially eligible, (the family’s gross monthly income must be equal to or less than 185% Federal Poverty Level (FPL) for their corresponding group/family size), until their monthly income reaches 200% FPL, making them ineligible for subsidies. This means that if a family receiving subsidies has an increase in income—say that a parent gets a raise for instance, and their income reaches that 200% FPL, in the current system this family would no longer qualify for child care subsidies and could not receive assistance in paying for child care. This is problematic since many families still struggle to pay for child care even after they have reached that threshold. The cost they take on for child care as a result of losing those subsidies may be far greater than their increase in income.

This sets up a system that could discourage parents from seeking salary raises and promotions, and puts them in the position of having to choose between receiving child care subsidies they need now, and working towards upward mobility in their jobs, which may lead to long-term, sustainable income in the future that will eventually empower them to disengage from child care assistance and other forms of assistance. In some cases, if families lose this subsidy it could mean they can no longer afford child care, which leaves them with no care for their children and could put their job in jeopardy if they must take time off work to find a solution. The proposed change would modify this cliff to be a more gradual slope, by incrementally increasing the portion parents pay towards child care ($1 for every $3 earned over 200% FPL) while gradually decreasing the amount that subsidies cover, instead of taking all of the subsidies away at once. This gives parents the opportunity to better their work position and pay without having to worry about losing their child care subsidies until their income allows them to meet the full cost of paying for child care. Allowing this continued accessibility to quality care for families is incredibly important given the positive impact that quality early care and education programs have been shown to have for our youngest children, providing a developmentally supportive environment during a time when their brain is most rapidly developing.

The second measure, to invest an additional $3.9 million into the Family Foundations Home Visiting (FFHV) program, is equally encouraging. According to the Wisconsin Department of Health Services website, FFHV currently serves more than 1,000 families statewide. Like quality early care and education programs, FFHV has been shown to have highly positive effects on the life-long outcomes of young children and their families. The FFHV program specifically seeks improved outcomes in at-risk families in the six focus areas identified in the Governor’s proposal, and does so through evidence-based home visiting that involves working with parents and children in their home environments. FFHV programming supports pregnant women and parents of children from birth to age five in engaging with resources that empower them with the knowledge to raise children who are physically, socially, and emotionally healthy and ready to learn. The Governor’s own Early Childhood Advisory Committee (ECAC) included home visiting in their recommendations for investment, noting that home visiting shows several promising outcomes including:

This increase in funding for FFHV is a positive step for at-risk children and families who benefit from this program, but it is important to keep in mind that this state level increase comes after a significant 20% cut in federal funding to WI home visiting last year, from over $12 million to $10.4 million. This proposed state level increase would fill in this funding gap with a little over the previous federal funds, but still more funding is needed to support and expand the FFHV program beyond where it is now. Zero to Three provides resources and tools you can use in helping policymakers and professionals understand the importance of investing in home visiting: https://www.zerotothree.org/resources/series/home-visiting-supporting-parents-and-child-development.

Both of these measures were included in the Governor’s 2017-19 Budget proposal, which is currently going through the legislative budget process. Keep an eye out for the finalized budget that should be effective this year at the beginning of July, in line with the state budgetary cycle.

For further detail regarding these measures and the  Wisconsin Works for Everyone proposal, watch the 2017 Budget Address: https://walker.wi.gov/wiworking

(This article was originally published in the SFTA Q1 2017 Newsletter. Subscribe to our newsletter).